Upgrading to Xamarin.Essentials from Plugins

Xamarin.Essentials is a new official library from Microsoft (that I worked on) that provides developers with over 30 cross-platform APIs for their mobile apps to tap into to access native features. Yes, this may sound similar to Plugins for Xamarin, but it is an evolution that is super optimized for each plaform, provides a consistent API, and is super crazy well documented. And of course it is completely open source on GitHub! 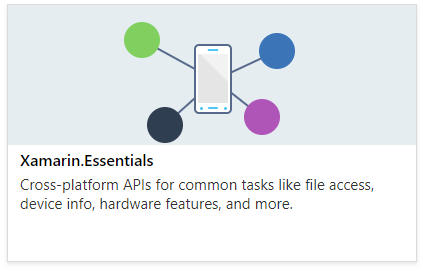 A lot of developers have asked me why they should upgrade their apps, that have been using Plugins for a long time, to Xamarin.Essentials. Here is my list:

Also because I upgraded one of my apps and it reduced that app's assemblies from 47 to 35 and even reduced the application size from 22.7MB to 22.2MB! Because it is crazy optimized!

With Xamarin.Essentials we started over from the beginning and we were able to craft new APIs for features, which means it wasn't just a copy and paste of plugins out there. We re-thought each and every API, optimized them with new code paths for each platform, integrated unit tests and samples, and documented the heck out of them.

This means if you are moving from Plugins to Essentials there is a tiny bit of work you need to do.

I will try to cover as many of my Plugins as I can, but I am sure I will miss some of them. Here we go!

My settings plugin was not only my first plugin that I ever created, but it also is my most popular plugin with over 1.4 Million NuGet installs over the years. Xamarin.Essentials replaces and upgrades it with the Preferences API. The APIs are extremely similar, but fixes a lot of small things that had been lingering around in my code. It is a very smooth transition as they both use the same default locations to store preferences and even allow for a specific name to be passed in.

The key difference here is that Set simply is a method void call and saves the value every time.

While the new preferences API saves to the same places it doesn't support all of the value types that the Settings Plugin does like decimals. I should have never supported these as I have to store them as string, but you can convert it easily like this:

In addition to the core APIs you could also open the app settings page on the device. This can now be done in the AppInfo API of Essentials:

Oh connectivity plugin... I love you! My second most popular plugin out there that has helped developers detect if there is an internet connection for several years. This is also an easy one as many of the APIs are packed into Xamarin.Essentials Connectivity API. There is a little bit of setup for permissions that you should do if you want to check connection types.

So you can replace this:

I simply love our App Info API that gives you all sorts of info about your application. You may have been using other plugins such as DeviceInfo or VersionTracking, but you can just use AppInfo now:

There is also a new Version Tracking API that is nearly a 1 to 1 replacement for the old plugin.

There are a lot of enhancements to this API including that it just uses the built-in Preferences API instead of serialization and file IO.

The share plugin kept growing and started to add tons of APIs for no good reason including opening the browser or setting text on the clipboard. Don't worry though because Xamarin.Essentials has a Data Transfer, Clipboard, and Browser API built right in!

I loved to hate my Device Info plugin becaues it had a lot of great ideas and a lot of bad ideas such as the original implementation of ID and a bunch of other random methods. This has all been fixed with Xamarin.Essentials and the Device Information API, and the addition of the Device Display API that adds the ability to get information about the device's screen metrics, which is very nifty.

Another popular plugin of mine that was originally brought over from the old Xamarin.Mobile code base. Xamarin.Essentials has built this API from the ground up on each platform and really thought about what developers need from this API. That is why there are actually two APIs that developers can use and a standardization on what a Location and Placemark is. So hopefully any other APIs could start using these. The first API is Geolocation which is how to get the cached location or current location on the device. Also Geocoding enables getting the Placemark for a Location. As of right now there is no tracking of location changes, but that is on the roadmap.

My plugin has gone under a lot of changes over the year and I have learned a lot that went into the new Text-to-Speech API in Xamarin.Essentials.

Another simple tranisition to the Vibrate API and even adds some new methods. For Android be sure to setup permissions correctly in your Android Manifest.

When you need to check the battery status of the device the Battery API is for you! We also have a new Power API that will help you detect if the device is in power saver mode too!

If you made it this far then I am impressed and want to give you a big hug! Xamarin.Essentials is pretty fantastic and I hope that you see how easy it is to change over from Plugins, that it has the ability to shrink your app size and help with startup time by reducing your total assemblies in your app.

One thing to note is that my plugins aren't going away any time soon. Many of them will go into maintenance mode as I push developers towards Xamarin.Essentials. The key difference is that many of my plugins for better or worse support a lot of different platforms that aren't supported yet in Essentials.

There are also some plugins that I plan on supporting long term as they provide functionality not yet in Essentials such as Permissions and Store Review or features that aren't planned at all such as IniApp Billing.