I build a lot of .NET libraries that include simple .NET Standard libraries to fully cross-platform plugins for Xamarin and Windows that target up to 10 different platforms. When I got started building libraries and shipping them to NuGet I went down a simple path of just building everything locally on my machine and manually uploading them to NuGet. This worked great for a single library, but as soon as I took on a second... third... forth... and so on, things got out of hand and I knew I had to put some sort of CI/CD in place. I went down many paths over the years and have now settled on using Visual Studio Team Services to fully automate the build of every library I create and a full distribution pipe line that goes to MyGet then to NuGet preview, and finally NuGet public release with a click of a button. Now I can develop and let VSTS handle everything for me so I can be productive:

Productive day... Thanks @VSTS for fully automating all my NuGet packages. pic.twitter.com/pDzYUXnG5I

If you look at this screenshot from VSTS it is everything that I wanted for so long in my development cycle. I push code, things are built, and automatically packages are pushed. In this post I am going to show you how I set this up for my projects and how you can too in just a few minutes.

Before we start to setup our CI/CD for libraries I highly recommend you move your projects to SDK style projects. You can read my full guide on how to convert a PCL to .NET Standard or how to convert a Xamarin.iOS or Xamarin.Android project to SDK Style. 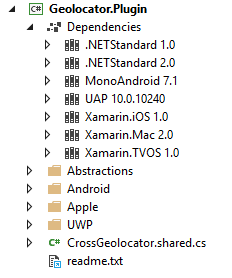 If you need to learn more about multi-targeting be sure to check out Oren's amazing MSBuildSdkExtras package which is the core of my templates and all of my projects.

If you are building only an iOS or Android library do not fear as you can still just convert your existing library over to an SDK Style. Take a look at my MonoDroid.Toolkit csproj on GitHub.

My builds inside of VSTS are actually really simplistic and only contain 6 steps to fully build my libraries. You can use the Hosted Visual Studio 2017 machines, however I have a small Intel NUC that runs a local VSTS agent so all my NuGets are cached which reduces my build times to seconds instead of minutes.

Select New and pick your source code that you would like to build. I then like to select Empty process because we can easily fill it in. 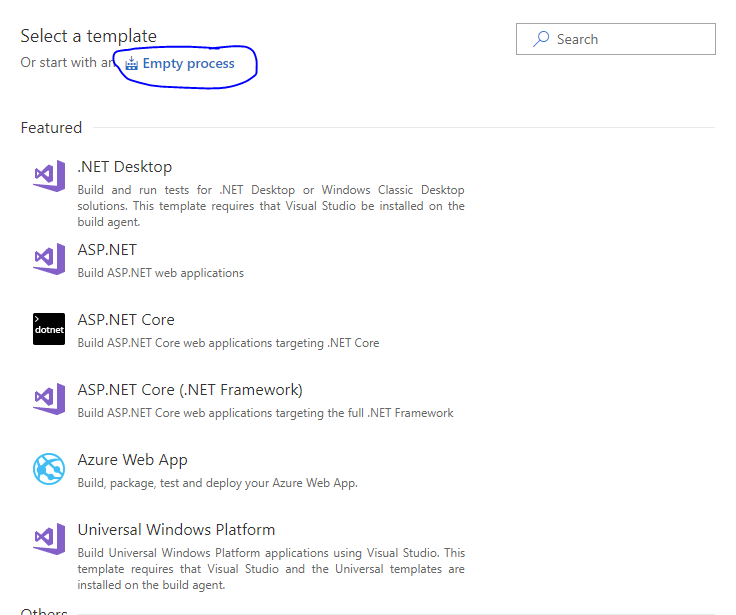 Under Phase 1 we are going to add two NUGet steps.

First is the NuGet Tool Installer task and change the Version to 4.5.1

Second will be the regular NuGet task which we will use the restore command on our solution that we are going to build. I like to pick the specific .sln or folder where it lives (no need to build other stuff).

I build my libraries twice! That is right twice! Once for a "beta" NuGet and once again for "public" NuGet. They are super quick and all it is really doing is changing the version flags. The reason I do this is for my release definition that will allow me to have a single release that goes from beta to public easily. We will be building the .csproj specifically using the MSBuild task:

We will add it twice so we can build the beta and public releases. Name the first Build Beta and the second Build Public. For each of them set the following:

For MSBuild Arguments user the following for Beta:

This will ensure that the build numbers are configured correctly and copy the artifacts to different folders.

Optionally, you may have some additional unit tests or device runners that may need to be run here.

The next thing to add is the Copy Files task to stage the NuGet packages for release.

This will pull only .nupkg files that we will distribute into a folder that release can pick up. 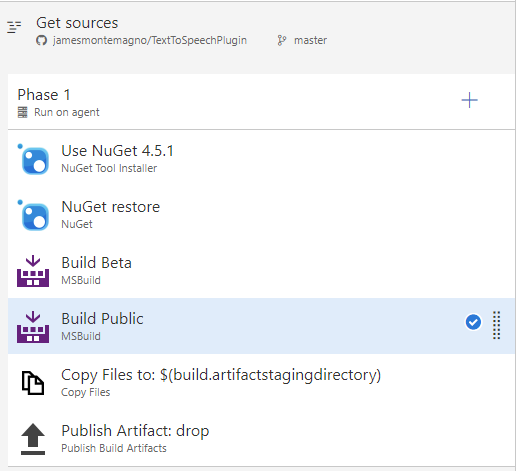 Under the Options tab in the build definition I like to format the Build number format such as: 4.5.0$(rev:.r)

You will probably want to setup *Triggers so CI and PR validation are configured. This means that every time master is pushed to a package is generated.

Now we have our full build complete it is time to setup our release. Our goal for me was to automatically have every build of master go to MyGet and then manually approve the next release to go to NuGet (beta) and finally another approval to go to NuGet with the public non-beta package.

Head over to the Releases section and create a new release definition with an Empty process. Think of Environments as the stages of release. We can create three of them to define each release of the artifacts. Inside of each environment are a sequence of tasks, just like our build definition, that will be run. For my libraries it is really simple as each has just one task. However, before the NuGet beta and production environments I turn on pre-deployment approval steps.

In our first environment we will want to push to MyGet. Add the NuGet task with the following settings:

For this step you will want to configure the feed information from MyGet: 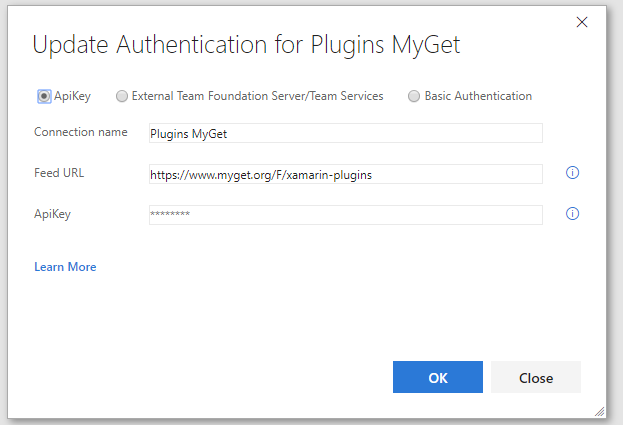 For this step you can select Clone or if you already create the new environment simply add the NuGet task again. The settings will be the same as above:

However, we will now want to select or configure NuGet as our destination: 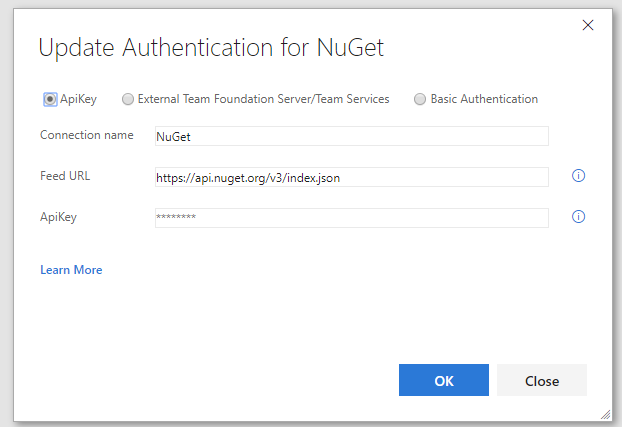 Head back to Pipeline and for this environment we don't want it to automatically trigger, we want to approve this release. You will see a lightning bolt and a person shape on the left side of the environment to configure pre-deployment conditions. I turn on pre-deployment approvals and select myself and turn off the policies since I am a solo developer: 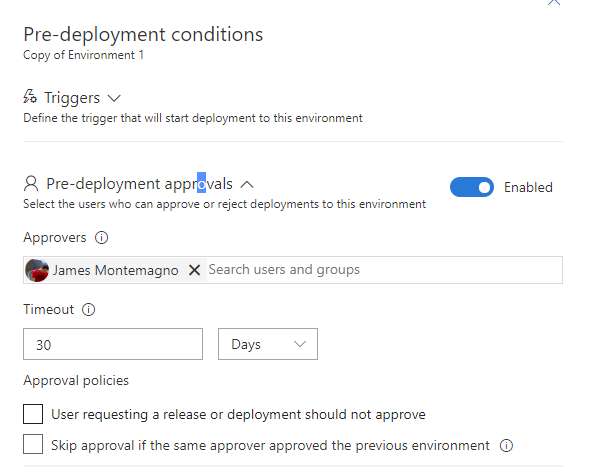 There is all sorts of rad stuff you can do here on pre and post-deployment so you should totally look into that for larger projects.

Add or clone another environment for after the Beta environment. This is going to be almost the same as the previous step but we are going to change our Path to NuGet package:

Notice I am using public here :)

Finally, click the big Add artifact button on the left side and select the build definition that you created earlier. Also tap on that little lightning bolt and turn on the Continuous deployment trigger so this flow automatically happens!

You did it! You are totally a Continuous integration and delivery pro!! Enjoy a seamless deployment of every push to master to MyGet and then approval steps to push to NuGet for any and all of your .NET Libraries. <3 Feel free to ask questions below.