In just under eight months in Orlando, FL thousands of mobile .NET developers will be heading to the next Xamarin Evolve conference. Xamarin Evolve 2014 was one of the most spectacular conferences that I have ever been part of and have ever attended. The most amazing developers came together for five action packed days of training, sessions, hacking, and collaboration. To keep it short, you do NOT want to miss Xamarin Evolve 2016.

I had the joy last year of crafting multiple mobile applications for Evolve including the main conference application and an interactive scavenger hunt based on iBeacons called Evolve Quest.

With Evolve 2014 coming to a close there isn’t much need for the mobile application to hang around on the app stores, which is why I teamed up with Xamarin’s very own Mike James to craft an updated Save the Date application for Evolve. We decided that we wanted something simple but native. It had to be elegant with the latest iOS and Android designed, but still have deep integration into the platforms. The new Save the Date application for Evolve can be installed from both the Apple App Store or Google Play for Android enabling you easily sign up for updates, add Evolve to your calendar, and of course share Evolve with your friends. 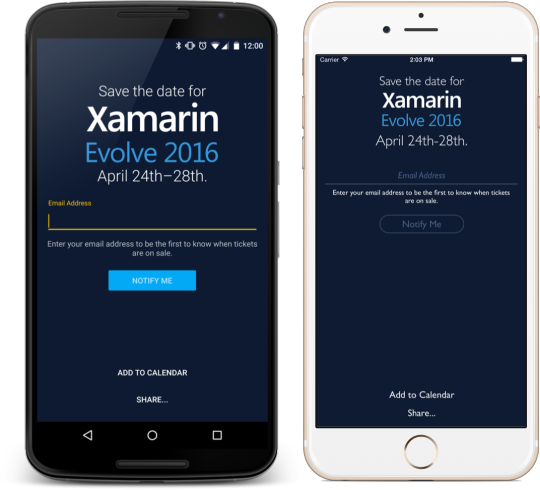 Best yet, is that you can see exactly how Mike and I created the application and create your own Save the Date application for your upcoming event. Simply head over to the github repo to download the entire source code and get started today.